Wake Yourself Into Snore-Free Sleep?

So why is snoring a big problem for people? Well, there are certainly a number of reasons, a major one being the fact that snoring frequently coincides with lack of breathing during sleep. Also, if you sleep with a partner, it can be annoying to the extreme and keep your partner up all night, whether he or she has a snoring problem or not! This is bad for you, of course, but definitely worse for your relationship. 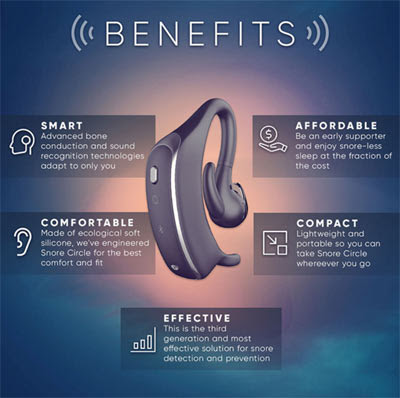 However, one of the main issues that people find tough with snoring and sleep apnea is a lack of sleep. A lack of sustained, restful, full-blown, relaxed sleep. The kind where the dreams are strong and restful. The real reason for good sleep, after all.

The consequences of missing out on this kind of quality sleep can be killer for a lot of people, and result in lost productivity, moodiness and not to mention total lack of energy during the day. It's enough that people frequently look to snoring mouthpieces like this one to calm their snoring and ensure a solid bunch of winks.

A Chinese company called VVFly, meanwhile, has a different way of tackling snoring: instead of attacking the issue at the core like a mouthpiece, they have a device called the Snore Circle that actually "transmits beeps and vibrations into a snorer's ear to stop snoring when it detects it." It's an interesting approach, for sure:

The CEO, Johnson Luo, who is also a snorer, said that the device doesn’t wake the snorer up, but just irritates the snorer enough to change position and stop snoring. The beeps and vibrations sent by the device vary in 54 forms according to the seriousness of the snoring.

According to the article on Forbes.com, the massively different customer experiences may be par for the course with this device:

Professor Li Taoping, director of the Respiratory and Sleep Research Center at Guangzhou Southern Medical University, said that snoring results from various causes, such as having narrower air passages, being overweight or out of shape, use of certain medicines, excessive drinking or smoking, and sleeping in poor positions. As a result, different methods and tools have varying influence on different people. That is why the users of Snore Circle have such different experiences from the device.

Now, this is certainly a device that we wouldn't recommend (especially because it never really addresses the initial or main cause of snoring), but that's OK, as it's only available in Mainland China at this point. But, there does seem to be one very interesting and frankly, useful reason to consider the Snore Circle:

What is also special about the Snore Circle is that it has Bluetooth that can send data to its mobile app, also of the same name, which can track and record one’s sleeping quality and snoring reduction.

So the power of a sleep lab in a Bluetooth device? Why yes, friends. Very, very cool. Cool enough, apparently, that the company as of this writing has already raised over $250,000 on funding site IndieGoGo to potentially get the product to more people.

So is the Snore Circle a stunning snore-killer like we've never seen before? Er, probably not. And the idea of "slightly bothering" the snorer perhaps up to a hundred times per night doesn't exactly sound like an experience most of us would like to be a part of.

But, in our eyes, what makes the Snore Circle so interesting is the fact that it uses your smart phone to track exactly how your snoring patterns work. Like a sleep lab in an earpiece's clothing, if it actually works as stated.

And that may be well worth the money for many folks.

Wake Yourself Into Snore-Free Sleep? is available on TSMR

source http://snoringmouthpiecereview.org/sleep-health/wake-yourself-into-snore-free-sleep
Posted by Unknown at 13:15