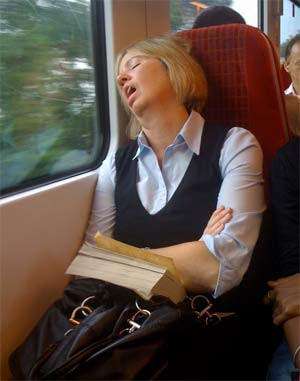 Sleep is supposed to be a wondrous thing. It’s a necessity to living life: you have a great night’s sleep and then wake refreshed and ready to take on the next day. The unfortunate reality for a lot of people is that sleep is not that magical elixir that renews their energy levels. Sleep disorders can make it almost impossible to get any semblance of rest.

Those who snore run the risk of waking their partners or even themselves. Those who grind their teeth or clench their jaw will wake up with splitting headaches. There are also those effected by sleep apnea, a disorder that causes interrupted breathing during sleep, that actually stop breathing several times a night.

Without true rest you can’t function to the best of your abilities the following day. Lack of sleep leads to lethargy, reduced energy and terrible moods. While some sleep disorders can be affected by your everyday such as stress and overall health, sleep disorders can also worsen existing health concerns:

Sleep apnea leads to interrupted breathing during sleep. In their study, the researchers found that patients with the condition who had a form of the heart procedure called angioplasty were much more likely to suffer heart attacks or strokes after their procedure.

The big difference held up even when the researchers adjusted their findings so they wouldn't be thrown off by factors like obesity and high blood pressure, which are common in these patients.

While the study did not prove sleep apnea caused heart disease to worsen, the authors think the first one probably exacerbates the second one.

"And patients who have been diagnosed with sleep apnea should know about the strong relationship between sleep apnea and heart disease," added Chi-Hang, a senior consultant in the department of cardiology at the National University of Singapore Heart Center.

For the study, the researchers tracked just over 1,300 patients from Brazil, China, India, Myanmar and Singapore who had undergone angioplasty with stents. In these procedures, surgeons thread catheters through vessels and clear blockages by implanting stents designed to keep arteries open.

It’s no surprise that sleep apnea and heart disease may be connected. While scientists are still researching this issue the fact remains that obstructive sleep apnea causes you to stop breathing during sleep. Of course your heart is going to be affected by this.

While research is ongoing it’s still beneficial to get yourself checked out by your medical or health care professional. It’s important to keep yourself healthy and functional. If your sleep, or lack thereof, is impacting the quality of your life you should do yourself a favour and talk with someone.

Hopefully once scientists are able to better understand how these disorders affect each other they will also be able to create an action plan to combat them.

Snoring And Heart Disease: Ugly Bedfellows is republished from http://snoringmouthpiecereview.org

source http://snoringmouthpiecereview.org/snoring-and-heart-disease-ugly-bedfellows/
Posted by Unknown at 15:08